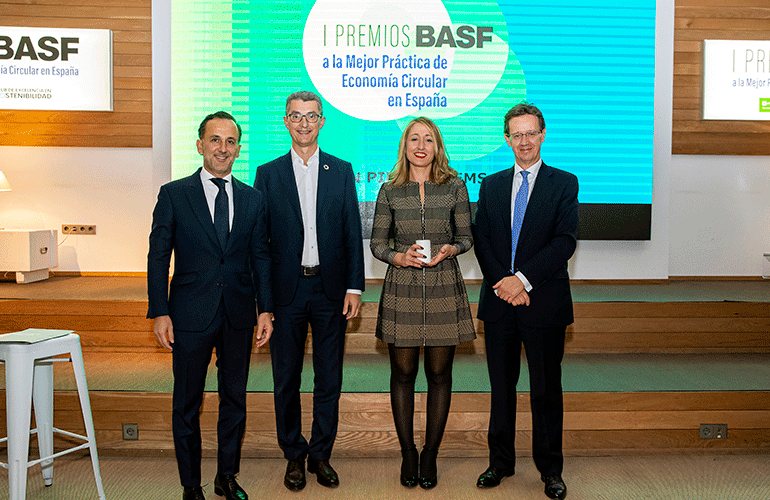 It is the first official awards to recognize good practices with economic, social and environmental impact on the Spanish company.

They were delivered yesterday by Javier Cachón, from the Ministry for Ecological Transition, in a ceremony organized in Madrid.

ABN Pipe Systems has been recognized with a second prize in the Small and Medium Business category.

The BASF Circular Economy Awards are the first awards that recognize the best projects and research that, based on the circular economy, contribute or have the potential to contribute substantially to the development of our country’s business competitiveness; with special attention to those that include the perspective of environmental and social sustainability.

During the delivery ceremony, Carles Navarro, General Director of BASF in Spain, highlighted: “At BASF we are firmly committed to the circular economy. And it is for this reason that today we deliver these awards. We want to recognize organizations, whatever they are, that are already pushing for change. That they are projected into the future and make courageous decisions in the present ”.

A jury of renowned experts formed by Javier Cachón, along with Juan Alfaro, from the Club of Excellence in Sustainability, Mª Ángeles de la Heras, Secretary of State for Universities, Research, Development and Innovation of the Ministry of Science, Francisco Lozano Winterhalder, professor in ESADE Business School and Senior Consultant at CEC International Boston and Xavier Ribera, Director of Communication, Institutional Relations and Sustainability of BASF Española, has been in charge of valuing the more than 100 applications that have been submitted in this first edition.

In the SME category, the jury wanted to recognize with a special mention to ABN Pipe Systems for the development of solutions in thermoplastic compounds produced with 100% post consumer recycled material, mainly polypropylene, to manufacture more than twenty product categories adapted mainly to the automotive sector, giving a second useful life to all plastic surpluses of the processing industry. Rosa Ana Campo, director of Quality, Laboratory and Environment of ABN Pipe has represented the company during the awards ceremony.

BASF and the Ciruclar Economy

The circular economy is one of the great challenges for BASF, which places one of its priority focuses on innovation to face the scarcity of resources that impel society, marked by climate change and population growth, away from the linear “take-manufacture-discard” system.

An important recognition for ABN

This is an important recognition for ABN Pipe Systems that demonstrates its commitment to the circular economy and sustainable development.